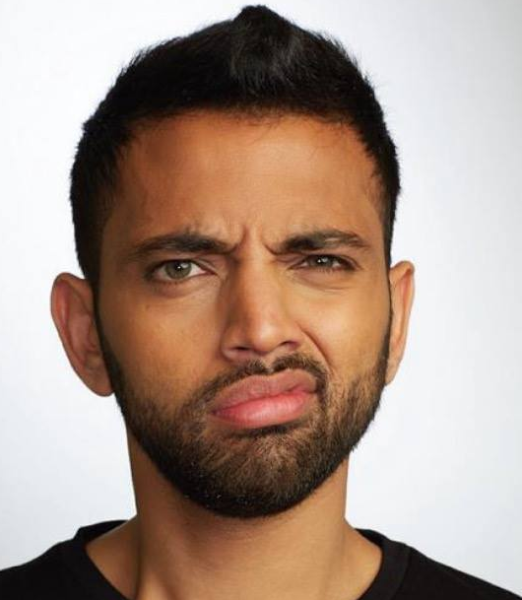 The fierce pride in India is real, although it’s worth noting Akaash’s middle school principal thought he was Mexican for all three years. Such was life growing up in suburban north Dallas. Home.

Akaash left home to help people. He wanted to be a doctor like his uncle and graduated pre-med from Austin College. Naturally, the next step was to move to Los Angeles and become a comedian.

There is no easy explanation for this leap of faith. It was an idea that always flickered in his mind. Even when he was young, Akaash saw comedy differently. He appreciated the nuances and broke it down to a science, fascinated by what worked and what didn’t.

The first time he performed in front of his friends in high school, he bombed. Of course, it’s a little more disheartening when the laughs don’t come while you happen to be on the mic at The Comedy Store in L.A.

You know, The Comedy Store, stomping grounds of Pryor, Seinfeld, Leno and… Singh? Akaash bombed there so badly that it was, well, almost funny. Before that night, he hopped on stage once every few months and called himself a comedian. After that night, he developed a singular focus on scrapping for as much stage time as possible while writing incessantly.

He went on a national tour in 2010- from D.C. back to Cali, making certain to stop in his home state along the way with a performance at “The Festival of India” at The University of Texas. The show was big enough that it earned Akaash his first write up, and that write up was as effusive as anything he could have written himself.* He could now see the hard work was yielding results.

He earned his first television appearance in 2011. He was one of a small handful of comedians selected to be a panelist on MTV’s “New Year’s Bash 2011”, making light of the celebrity news we all take too seriously.Then he piloted for a series with MTV Desi has been approved for a full season, and is set to begin in 2012. In 2013, He was chosen as a cast member on MTV2’s “Wild N Out”. In 2014, it was HBO’s “The Leftovers”, as well as MTV2’s Guy Code. And more recently, he has just finished filming for the second season of MTV2’s “Joking Off”.

There is plenty going on right now, a whirlwind of change. This comedy thing has a way of eating people alive, but it’s the opposite for Akaash. He feeds on it, mind and soul, always hungry to show you something serious with the next laugh.

This wasn’t a turning point. There are no turning points in this business, just a perpetual grind until you can’t take it anymore. Little by little, Akaash gained traction while learning and developing his voice, unique in both content and style.

One step forward, two steps back. Two steps forward, one-and-a-half steps back… His drive grew with his name, highlighted by head-turning performances at The Laugh Factory, The Improv and yes, The Comedy Store.

And just like that, it was over in Los Angeles for the time being. Akaash saw a plateau on the horizon, and that is one thing he will never accept. Because really this whole ride boils down to one personal truth. He would rather fail doing something he loves than succeed at something he never really wanted.

Akaash realized the need to test that love in New York, a place he envisioned would tear him down so he could grow back stronger. No city in the world would be better suited to oblige.

If L.A. gave him the ability to be brilliant before the red light in the back started blinking, New York provided the raw edge that kept him from being owned by that light. His goal morphed from being somebody who told jokes while sneaking in personal beliefs to a beast who said exactly what he wanted to say and still made you laugh.

Sounds like a poetic transition, right? As poetic as the streets of New York. So Akaash continued his climb in New York, undeterred by setbacks that are necessary for a comic who refuses to go for cheap laughs.

He advanced to the semifinals of Stand-Up for Diversity on NBC. He has made headway on the New York club circuit, performing at major clubs like Caroline’s, Gotham, and Stand Up New York.